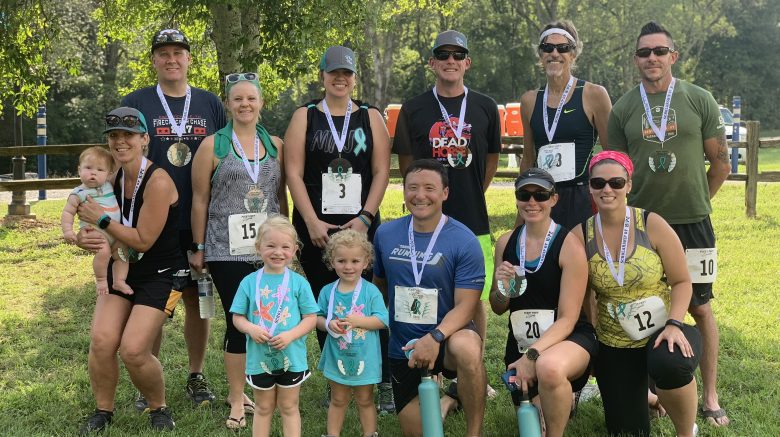 We are #quatsqrew: Comprised of family members, friends, co-workers, supporters, and church family of Quatina M. Wolaver. Quatina was a single mother to her only daughter, a much-loved middle child, a devoted Christian, and so much more to so many people. In June of 2017, Quat, who was 49 years old, was diagnosed with clear cell ovarian cancer. Her diagnosis came after about a year of ovarian cancer symptoms, which went undiagnosed by a plethora of doctors, nurses, her long-time OBGYN, and all her friends and family who were also ignorant to the benign symptoms of ovarian cancer. After a short and brutal battle, Quat went to be with her Heavenly Father on October 7th, 2017. She had 115 days from the day the surgeon’s eyes first saw the cantaloupe-sized tumor until she drew her last breath on this earth. During those 115 days, Quat took the opportunity to show her whole family and anyone watching what grace, courage, and thankfulness look like in action. No matter who was jabbing her with a needle, making her take or eat something she didn’t want, or asking her for the ten millionth time that day for her name and birthday, she thanked them. Every time. Without fail. She might not be able to lift her head, but she could ALWAYS muster those words. She rarely complained about anything, even though we could all very clearly see the toll that was being exacted on her as she fought for her life. It was this remarkable attitude, along with the way Quatina lived the rest of her life, that inspired her family to start this Foundation in her memory. Our primary mission is to spread ovarian cancer awareness to as many people as we possibly can, beginning in our own community. Unfortunately, in the ovarian cancer world, Quat’s story is not unique – MANY women experience the same frustration of long term, undiagnosed symptoms. In fact, 80% of women are diagnosed in Stage 3 or 4 because the symptoms of this disease are so benign and there are currently no tests or pre-screens available for ovarian cancer. That still doesn’t mean her story has to be everyone’s story, though. If people are aware, if there was more information available, if we can spread the knowledge far enough, maybe we can change one beautiful woman’s story. That would be enough. We hope that you will join us in this fight and become one of #quatsqrew, too. Together, maybe we can change someone’s story to a happy ending.